How Unwanted Baggage Dragged my Company into Receivership 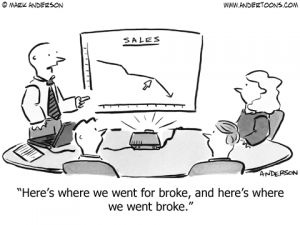 Have you been through the pain of putting a company into receivership? It leaves an indelible mark on employees, shareholders, suppliers, customers not to mention the indirect effect on families and the local community.

Five months I worked for Praxis Tailoring in 2000 before recommending, as Finance Director, we call in the receivers. Six months before my first child, was due.

Why join at all?

Well there was a fresh new team in place bringing about a recovery in fortunes. It was risky venture in a new industry but had the potential for good earnings. And I’m a sucker for an exciting challenge.

They sold ladieswear to Next, Laura Ashley and with £10m turnover & 150 staff were a reasonable size. The recovery had come about by closing the UK manufacturing units and “offshoring” production to Morocco & Russia.

I made a big mistake by not staying in touch through my 3 month notice period. For during that time the companies’ fortunes plummeted. The offshoring unit in Morocco became unreliable and couldn’t deliver on time. Naturally Next began to source garments from elsewhere. The biggest customer had lost faith.

My first day on site was not the picture I’d been painted at my interview. The job was now all about preserving cash as suppliers faltered with deliveries & customers lost confidence.

We may have survived if it wasn’t for the baggage of ongoing rents and rates from the recently closed UK manufacturing units. It was a cost we couldn’t wriggle out of and was like a millstone round our necks.

Nowadays in such a situation, a “pre-pack” would be considered to keep the company trading and employees in jobs without the history dragging it down. Back in 2000, that option wasn’t open to us.

Cash that should have been used to buy materials to finish the garments to sell to Next was being sucked out of the company in rents.

When we couldn’t pay our key suppliers, word quickly got around the industry. Very soon every supplier was on the phone demanding payment. Even the local florist. Everyone wanted their cash. Everyone thought we were going under.

We were managing cash by the hour.

There were so many phone calls, the post it notes formed a daisy chain six feet long and reached the floor.

I wanted to keep everyone happy. But realised I couldn’t and that hurt my professional pride.

We were managing cash by the hour. We only paid suppliers who were needed to get the garments to customers. We talked to them but not to others as there were too many to handle. The florist paid us a personal visit and waited in reception until he got paid.

We postponed paying the PAYE & VAT bills. But we made sure we paid the employees who had been so supportive. We even made sure everyones expense claims were up to date.

I went home at night and the alternatives for keeping the business afloat kept turning over in my head. I couldn’t sleep and was gradually getting more worn down.

The working week always finished early on Friday at 1pm.

I decided to take myself off into the Yorkshire Dales and go for a very long run over Pen-y-ghent. It was the best place to think clearly. By the end of the run I felt like a weight had been lifted off my shoulders. I had made a decision – we were not going to reverse the downward spiral and had to take the proper action.

Putting the Company into Receivership

Monday first thing, I met with the Managing Director. I proposed we request half a million pounds from the bank or ask to be put into receivership. He and the other directors quickly agreed to this.

Unfortunately the bank didn’t agree and within days we handed control of the company over to the administrators. They tried to find a buyer but failed. All 150 staff were laid off within weeks. My last task as employee & Company Secretary was to lock the building and hand the keys to the local solicitor.

Around the same time the “Phoenix 4” were receiving a Government bailout to keep MG Rover afloat. Perhaps given the mess they ended up in, the Government would’ve done better to keep us afloat instead?