5 Project Failures and What I’ve Learnt 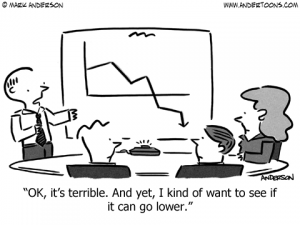 So many projects set up with good intentions end up not delivering the full benefits. Mine included. I’ve had a host of project failures to my name.

I figure it’s fine to make a mistake, but I should learn from it. Which is why I thought it worth sharing 5 project failures I’ve made and what I’ve learnt from those mistakes.

I’d been at a client for well over a year and had recently taken on a graduate for 6 months. In hindsight, I made an error in not specifically bringing him in to do a specific project with an agreed outcome. The client was using him to do jobs more appropriate for a permanent employee. That was how they saw his role.

the project seen as being secondary

It took me 6 weeks to correct this. We rescoped the project to focus myself & my graduate on the implementation of a new company wide business system which had recently been commissioned. We still found that the clients employees thought my graduate’s primary role was to fix technological problems, with the project seen as being secondary.

To avoid the same mistake reoccuring, I mapped out a process to follow. I commissioned Devant to draw up a master commercial client contract which now forms the framework of my Mentored Graduate Programme.

2.  Doing too much myself

One of my first roles involved the introduction of a company wide business system. It was a big learning curve. The company was an £11m venture capital backed precision engineering company with over 100 employees. I needed involvement from the manufacturing teams, sales engineers as well as maintenance engineers and all the office based staff.

Day to day work got in their way

I got buy in from team members and set up regular steering meetings. But the team members weren’t following through on their allocated tasks. Day to day work got in their way.

Rather than escalating the issue to the project champion – the Managing Director, I tried to fill the gaps in myself. Too keen to please. Inevitably we began to miss the deadlines and I was working long hours.

As a project manager, I had the overall vision of the project and what it took to get there. But how to persuade the employees to go along with me? It’s the biggest recurring challenge the graduates I employ face. They can jump 10 steps at once but the clients staff are only comfortable taking single baby steps.

Referring to the company detailed in point 2, I made the mistake of not carrying all the staff with me. I tried to move too quick for many of them. I didn’t put myself in their shoes to see the issues from their perspective. As a result they were resistant to change. After we’d gone live, they asked to keep using their existing manual processes alongside the new system.

It took several months to regain their confidence. And many months more before they began to sing the praises of the system. I now speak to every user to gather their business requirements before starting implementation.

Morton International Ltd closed their UK head office in Hounslow and moved it to be part of the Dewsbury production site. I was recruited as their Finance Director to set up the finance and admin operations.

The project immediately lost any backing or budget

The project champion was the Hounslow finance director – until he left. This coincided with Rohm & Haas acquiring Morton. The project immediately lost any backing or budget. We could only make small tactical improvements. Rohm & Haas quickly announced their intention to recentralise operations in Croydon. I left the company soon afterwards.

5. Loss of key staff during the project

all my technical team would be made redundant

During my corporate days at Orange, a group platform was introduced in Denmark. I was business project lead for the new mobile downloads database. The technical project lead and his team were Danish. The decision was taken for Orange to pull out of Denmark and to close the group platform. This meant all my technical team would be made redundant.

We decided to fast track the project and launched it before the platform shut and the technical team departed. We figured it’s a lot harder to cease a live service than one in development!

We succeeded in launching it, but it left me with a live service but no technical team or overall champion. We couldn’t properly support the service. After a lot of lobbying we bolted the service into the new group platform being built in France. With it came a replacement technical team to fill the void.